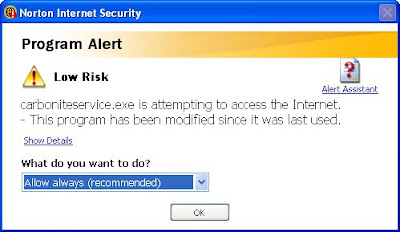 Maybe Norton's lawyers made them do this so that they can disclaim responsibility if they actually do make a mistake. In that case, it wouldn't be the designer's fault, and I will hereby transfer my annoyance and scorn to the lawyers. But Norton messed up here, because they did not put themselves in their users' shoes, as they should have.
Posted by David S Platt at 1:20 PM

David, what you are asking for here is the equivalent of car that's smart enough to automatically apply the brakes or swerve to avoid a collision. It just can't be done at the current state of the art. The only way a firewall could be sure if a new program update is malicious is if all the virus and trojan writers in the worked agreed to register their malware in a central register.

In general I like what you stand for, and I have practiced similar philosophies for 20 years. However, IMHO you damage your credibility by asking for something that is plain plum impossible. You would do better to ask for something that at least softens the blow for your wife under these impossible situations, like a nice 'n easy explanation of the situation.

I'm saying, David, that if Norton can't figure it out, my wife's contribution, or even mine, is of less than no benefit. Silence would be a better response to this situation than what they actually do, which is upset people for no benefit, nor any possibility of any benefit. You and I might reasonably disagree on whether silence would or wouldn't be a better response (I say yes), but I'm sure we would agree that it's technically feasible, no?

david, if what you say is true, then this mean that Norton's advertisement that their products are 'easy to use' is no longer true anymore. Now there's something to ponder over about.

I kinda support both david.

They should be sure and allow it silently and at the same time inform the user they have a choice if they do not agree.

You want to try Zone Alarm.

It eats programs, even programs you put in the list to say "allow this program".

It removes them completely from your system without telling you!

Norton my be awful but it is less awful than some others!

Most pop-up messages can be confusing and worrying to the beginner - I've known people who were half convinced that the cops were about to hammer down their door because something or other 'performed an illegal operation'. The 'YOUR SYSTEM MAY BE AT RISK' message from Microsoft security centre and other security software has sent other friends into a complete panic.
Some software is kinder to the beginner than others. I would wholeheartedly recommend Commodo Firewall, Anti-virus and Bo-clean in this respect. They scan your system when you install them and create a whitelist so the user gets bothered with fewer questions. It is a very bad idea for the beginner to get into the habit of clicking 'yes' to every messaga box just to make it go away.

They can make it smart enough to block threats and allow credible programs through without prompting the user. In fact, the new version never asks me about a program, it maintains a blacklist and whitelist like ZoneAlarm and monitors unknown programs to determine if they're a threat. If it blocks a program I want, I have the ability to unblock it.

If a software program physically cannot decide I would probably agree with you, but in most circumstances the decision is tossed in the user's lap because the software makers were too lazy to implement it.

By the way, I love your book David S. Platt (the other David).