Speaking of things that just work, or fail to, I would be remiss if I did not acknowledge the humble cup holder. My 1979 Volkswagen Rabbit and 1987 Volkswagen Golf had none. My 1995 Saab had only one, and that located very inconveniently back behind right my hip. Then somene started paying attention to real customers, and they bred like bacteria all over the automative industry -- my 2003 Honda Odyssey minvan had 17 of them -- enough for 7 two-fisted drinkers, with three left over, plus a collapsible eating able between the front seats. Matthew DeBord pays homage to the, in Slate's The Big Monday Blog at this link . Maybe automotive engineers don't care about eating in their cars, but real customers do. Just one more example: Know Thy User, For He Is Not Thee.

Microsoft is spinning out a huge amount of hype, even by their own standards, for Bing, their new search engine which they hope will challenge Google. They have a long way to go to get even close. Here's an example:
I'm in Milano, Italy right now. I just finished my keynote of Remix Italia yesterday, to a really fantastic audience. I love speaking to such turned-on people. Today I'm taking the day off, and I figured I'd go downtown and see the famous cathedral, one of the largest and finest in the world. I wanted to read a little about it before I went there, so I type the name into the search engine box on the MSN home page. As humans do, I made a small slip and typed in the phrase "milan cagthedral". Did Bing recognize this and do its best to figure out what I mean? It did not. It showed me the following screen, telling me to spell my words correctly: 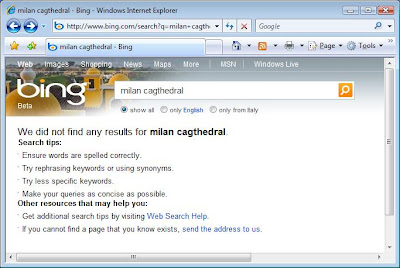 It's MY fault. I have to be precise. Bing won't help me. I have to meet its expectations. Google, on the other hand, if it can't get what the user asks for, has always done its best to figure out what the user really meant and do its best to satisfy that user. When I type the same misspelled phrase into Google, here's what I get: 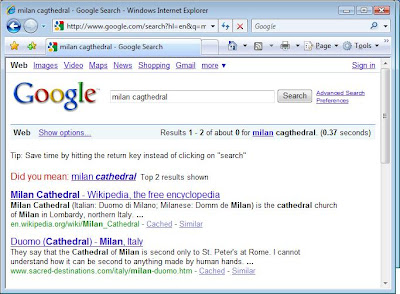 "I couldn't find exactly what you wanted, but here's the next best thing, the closest I could come to what I think you want. Is that OK with you?" That's what Google says. Not, "Hey dimwit, pay attention and do it right, and then maybe I'll deign to speak to you, and then again maybe I won't," which is how Bing's message feels to me.

This feature of Google has been around a long time. It recognizes that users are human. Bing's behavior requires users to become more like a computer: diligent, thorough, precise. We are none of these things naturally, that's why we invented computers. Google recognizes, respects, even enhances the humanity of its users.

If Bing intends to seriously challenge Google, Microsoft is going to have to change its perception of who its users are. Because the one thing that every single user of Bing has in common is that they are all human.

I'll be giving the keynote talk, "Why Software Sucks", at Remix Italia in Milano this Wednesday June 17. Information and registration is at http://www.microsoft.com/italy/nextweb/remix/index.aspx . Hope I'll see you there
Posted by David S Platt at 10:24 PM 1 comment:

Those of you who have read my book or seen me in person will no doubt remember how awful the UPS.com web site is. One of my readers tangled with them lately and has this to say. He reports receiving the following email:

Here is the reader's comment to them, which he sent via their web page. BTW, you have to work through 5 separate screen to send them an email. My reader must have been really angry to go through all that effort:


It does not help me to have you "time out" my registration. It seems that it only helps you to perhaps clean out your files.Your customer is not YOU it is ME. I have website logins that I have not used in years that still know about me just fine. Since your website is well known for not responding well to your customers (see book Why Software Sucks by David Platt), I am not surprised by your request. I will email Mr. Platt with this latest stupidity.

UPS still hasn't gotten it through their heads that making their users think is a bad idea. I hope the rest of you can learn from their example what not to do.